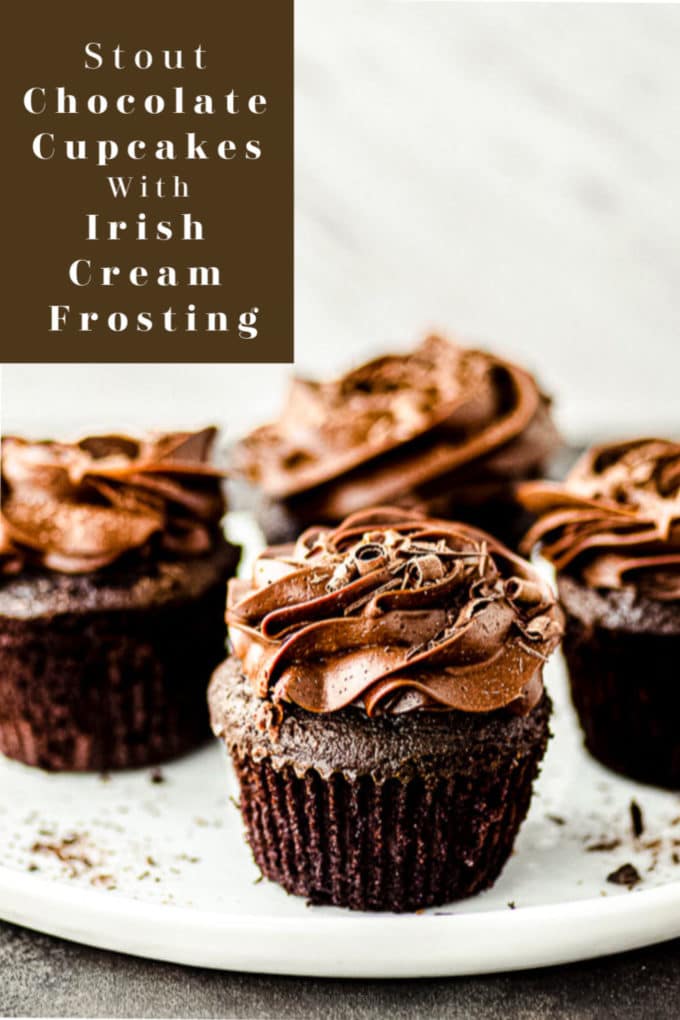 These decadent vegan chocolate cupcakes are made with stout beer, filled with chocolate whiskey sauce and an Irish Cream frosting to finish it all off. It’s a grown-up dessert that blows everyone away! Vegan Chocolate Stout Cupcakes with Irish Cream Frosting are the ultimate treat.

Do you ever wonder where food bloggers get their recipe inspiration from? Magazines? TV shows? Yes, sometimes. Other bloggers? Definitely. But a lot of times, inspiration comes from everyday things, like going to the market, or a billboard or visiting friends. And I find that to be the most exciting source.

Years ago, I visited a friend who had just baked a batch of Guinness chocolate cupcakes with whiskey ganache and Bailey’s frosting. I am NOT exaggerating when I say they were the most delicious chocolate cupcakes I’d ever had! I knew immediately that I needed to start developing a vegan version, which is exactly what I did here. It took lots of trial and error, but this recipe is the best vegan chocolate cupcake recipe. It’s moist, decadent, a little bit boozy, and the perfect treat to spoil yourself and the ones you love. We hope you enjoy it!

Making these cupcakes vegan only requires a couple simple ingredients that you probably already have at home!

I learned one of the coolest tricks to creating a vegan fudge sauce, and it’s so simple. It’s just maple syrup and cocoa powder, and when whipped together they make the most decadent drizzling sauce! I combined that with a bit of whiskey to create the most incredible filling that oozes out of each stout cupcake.

To get this frosting just right I had to create a dairy-free Irish cream. Was I up for the challenge? You bet! When combined with vegan cream cheese, cocoa powder, and confectioner’s sugar...well, you should probably sit down when you take a bite, because it’s so good you just might fall over!

How Much Cupcake Batter in Each Cup

It can be tempting to fill each cupcake tin mostly-full with cupcake batter, but resist the urge! When your cupcakes are too tall they will sink in the center and have dry, cracked tops. For a moist, dense cupcake, fill each cup half full. Trust us on this one!

Homemade Cupcakes Ahead of Time

Since these chocolate cupcakes are perfect for entertaining, it’s also helpful to know that they can be made ahead of time. Bake the cupcakes one day in advance and then cover them tightly. Do NOT refrigerate--this will dry them out! Fill and frost the cupcakes right before serving for the most perfect results. Unfrosted cupcakes can also be frozen for up to 2 months. Pop them in the refrigerator overnight, then bring them to room temperature before frosting.

How to Make This Chocolate Cupcake Alcohol-Free

Just a few quick swaps will give you the same decadent, crave-worthy cupcakes without any alcohol at all. Simply trade...

These vegan chocolate cupcakes are made with stout beer, filled with whiskey spiked chocolate cream, and topped with a homemade vegan Irish cream frosting.

Need to make these alcohol free? Here's how: