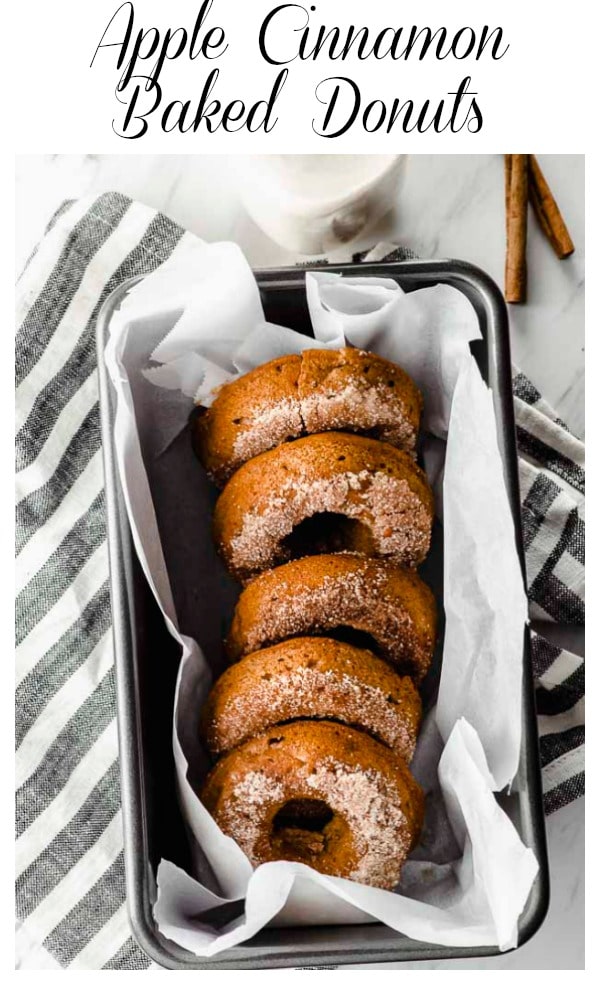 Apple cinnamon baked vegan donuts with a sprinkle of cinnamon sugar. A sweet breakfast to start your day with a good amount of energy!

These baked vegan donuts are super easy and quick to prepare. Unlike traditional fried donuts, this batter doesn't have yeast, so no need to let them rise. By baking them in a donut pan, they can be made all at once (rather than having to fry them one at a time), and the amount of fat required is obviously lower. They're light and airy, with a hint of cinnamon and juicy pieces of apple in every bite!

How Do You Make Baked Vegan Donuts?

Making baked vegan donuts is easy, once the dough is mixed and ready, just pour it into a greased donut pan and bake it for just 11 minutes. We highly recommend using a donut pan for this recipe and to make other baked donuts.

You can bake donuts without a donut pan by rolling some parchment paper or aluminum foil and placing it in the midlle of each one of the cavities of an muffin pan and placing the dough around it. That's if you wish to go through the trouble...

Self Rising Flour: see the recipe card on how to make it at home

Flax Egg: you can use a regular egg, if not vegan

Coconut oil and GrapeSeed Oil: you can use any other neutral tasting oil inspead of the grapeseeds oil.

Apples: We used Granny Smith, but feel free to use any apple you have in hand

For our apple cinnamon donuts we picked a cinnamon glaze, but you can also just dip them in cinnamn sugar. For the glaze you will need:

Apple cinnamon baked vegan donuts with a sweet cinnamon glaze, a sweet breakfast to start your day with a good amount of energy!

To make the cinnamon glaze