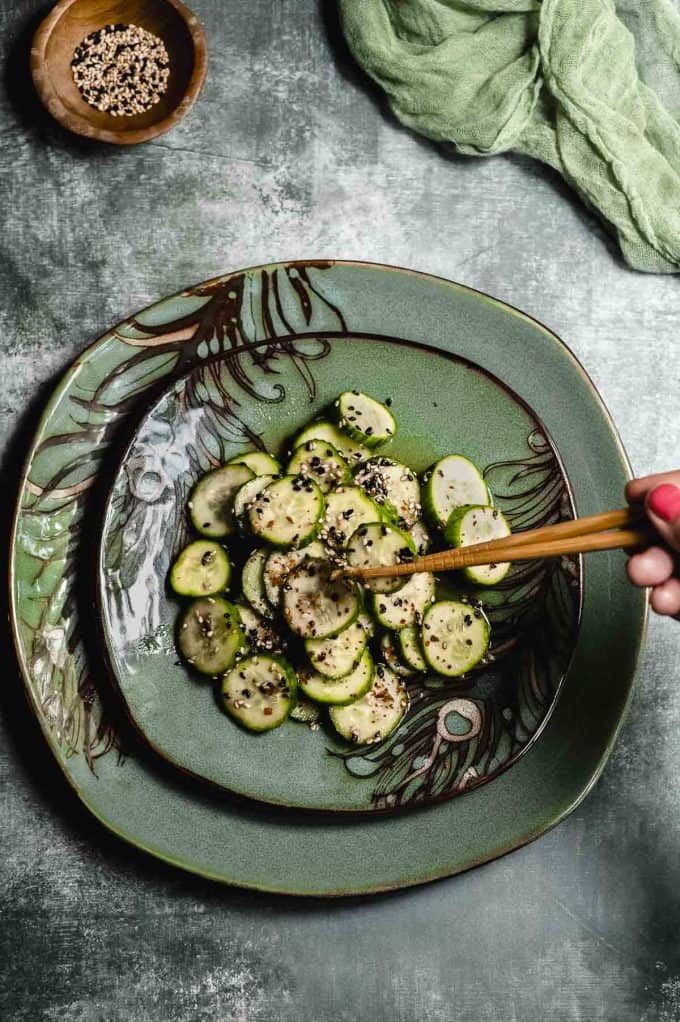 Enjoy this light and delicious Asian Cucumber Salad. It's a bright, fresh addition to any meal. Thinly sliced cucumbers are tossed with sesame seeds, ginger, sesame oil, rice vinegar and a touch of heat.

Variations on how to cut this Easy Asian cucumber salad

You can have fun experimenting with different shapes in this crunchy Asian cucumber salad for a fun presentation. Here are some suggestions.

How to Make Asian Cucumber Salad

To make this salad recipe, begin by cutting the cucumbers into slices. In a Japanese Cucumber Salad the cucumbers are cut in half length-wise and sliced half moons instead.

You do not need to peel the cucumber but you can if you prefer. In a small bowl which the dressing ingredients, and toss it all together in a large bowl. Keep the salad in an airtight container in the refrigerator for three to four days.

What are the different types of Cucumbers?

Here are some cucumber varieties we know about.

Do you need to peel cucumbers?

No. The skin of the cucumber is edible, but we prefer to peel some varieties like the slicing cucumber because it often comes waxed and the skin is thick, Kirby cucumbers also have a thick skin which we also prefer to peel.

Yes. Cucumbers contain vitamin C and B, cooper, phosphorus, potassium, and magnesium.The dish is also low in calories and low carb. Just be mindful of the dressing you use, so you can keep it healthy.

What to Serve with Asian Cucumber Salad

Enjoy this light and delicious Asian Cucumber Salad. It's a bright, fresh addition to any meal. Thinly sliced cucumbers are tossed with sesame seeds, ginger, sesame oil, rice vinegar, and a touch of heat.