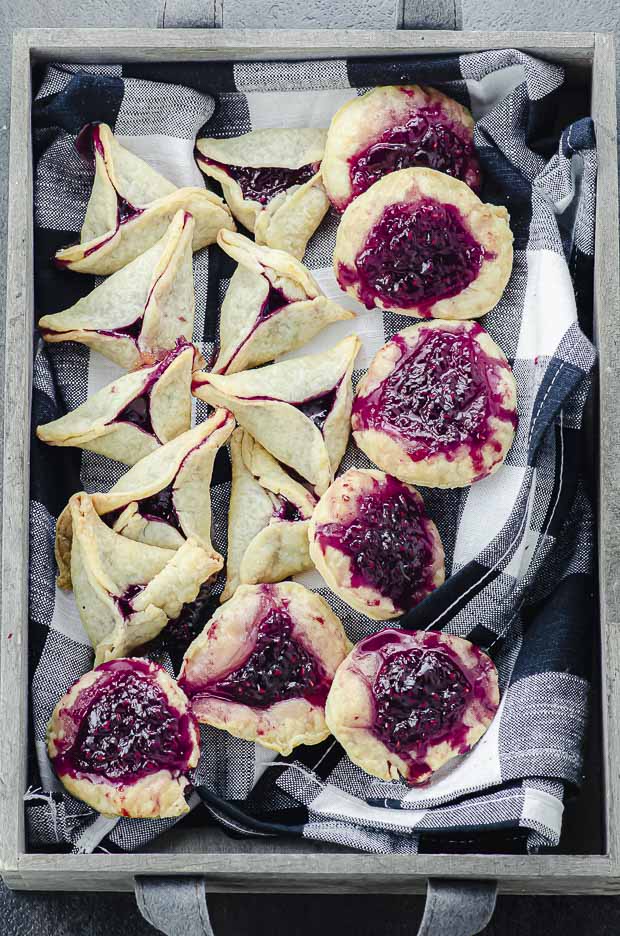 This year, we tried a shortcut for our  Hamantaschen, since we were didn't have time to make dough from scratch. We used pre-made vegan (parve) pie dough we found on the freezer section at Whole Foods. They might not be the prettiest hamantaschen ,but they are amazing!!

Hamantashen is the Yiddish word that refers to the triangular-shaped filled cookies that are traditionally eaten on the Jewish Holiday of Purim (scroll down to learn more about this holiday). In Hebrew, Hamantaschen are called Oznei Haman ( Haman's ears).

Our kids love making Hamantaschen because, in our house, when they were little, it was a family affair. Once the dough was made, we would all get together and everyone would choose their favorite filling. They were absolutely no rules. The crazier the flavor, the better!

This year we didn't try any crazy flavor combinations because our kids' favorite Hamantaschen are always the ones filled with raspberry jelly, so we just experimented with the dough.

Why are Hamantaschen Eaten on Purim?

The symbolism of why we eat Hamantaschen is not quite clear, some say it refers to the weakening (tash) of our enemies, some say it refers to the triangular hat that Haman wore, and others talk about the shape of Haman's ears.  No matter where the significance of the custom to eat hamantaschen comes from, Jews around the world enjoy these delicious sweet cookies every Purim.

When we reviewed Paula Shoyer's cookbook Holiday Kosher Baker, we were able to re-publish the amazing vanilla hamantaschen dough from her cookbook.  If you don't want to use our shortcut, we highly recommend her recipe. It's amazing and foolproof.  If you're looking for a vegan hamantaschen dough recipe, check out our Walnut and orange blossom hamantaschen,  or our Chocolate, peanut butter and bananas Hamantaschen.

2. Whether you're using pre-made dough or homemade dough,  roll it ⅛" thick.

3. With the help of a glass or round cookie cutter, cut out 3" dough circles

4. Set the dough circles aside and roll dough again and repeat the process

5. Spoon about 1 teaspoon of good quality jelly in the middle.

6. Pinch the top of the hamantaschen dough

8. Make sure to pinch the dough well so it sticks together, or it will come undone in the oven (as it happened to us!)

9. I (Vicky) didn't get these hamantaschen even, that's why most of the time I leave the baking to my sister Ruth 🙂

Purim is a Jewish holiday that commemorates the win of good vs evil through the hidden hand of God. During Purim, we read the book of Esther. Esther is the female heroine of the Purim story, she was a Persian Jewish Queen that risked her life to save the Jews of Persia from a deadly decree from the king's right-hand man, Haman.  Haman had a rivalry with one Jewish man, Mordechai, and because of his hatred, Haman fooled King Ahasuerus to sign a decree to annihilate all the Jews in his Empire.

How is Purim Celebrated?

This year, we tried a shortcut for our  Hamantaschen, since we were didn't have time to make dough from scratch. We used pre-made vegan (parve) pie dough we found on the freezer section at Whole Foods. They might not be the prettiest hamantaschen ,but they are amazing!!